Developing evidence-based approaches enables strategic and cost effective use of resources, improving opportunities for play and directly influencing children's enjoyment of their play. This case study explores work undertaken with a community passionate about improving levels of play sufficiency for their children.

This case study documents the work undertaken with community residents to develop a strategic approach and community-wide plan for improving neighbourhood spaces for play. This process resulted in the formation of a proactive resident-led steering group, working to an agreed set of principles based on children’s right to play within the public realm. The group has subsequently gone on to make significant improvements to a number of the identified spaces and have supported the local authority in further developing playwork provision in the area.

To enhance the playfulness of the community as a whole and in doing so foster greater community interaction through increasing people’s use of these areas.

To look collectively at a range of spaces across the community and considering ways of maximising their play value, naturalness and connectivity, whilst keeping maintenance costs as low as reasonably possible. Whilst each space is unique (and therefore offers unique opportunities for play), they were also recognised as being part of a larger playable landscape. Emphasis was therefore placed on enabling and encouraging children and their families to move independently between sites, making use of a broader range of spaces for play.

The key stages described below were facilitated over approximately 12 months and summarise more than 15 meetings with community residents.

Stage 1: Historic use – developing a shared appreciation of playing

The initial step was to hold a community meeting of people who had previously expressed an interest in seeing spaces for play in the community improved or who had a responsibility due to their involvement with the local Community Council. This group began by discussing where previous generations of children had played in the area and how changes to the physical environment may have impacted upon children’s ability to access spaces for play. This led on to discussions about children’s right to play, the benefits of playing, the types of spaces and attitudes that support play and the barriers that children might experience to playing.

Stage 2: Existing use – identifying opportunities for play and the spaces children actually use

The next stage was to identify potential local places for play, exploring how people currently make use of and access these spaces and beginning to consider:

This stage included carrying out a detailed audit of spaces within the community, talking to community residents (including younger and older children) about their current experiences of using these spaces, and from this identifying both positive and negative aspects in terms of the quality and accessibility of existing places for play.

From this, a large display was produced based on a map of public open space in the community enhanced with photographs taken during the community audit. Different coloured post-it notes were then used to highlight positives (green), negatives (red), comments about the historic use of spaces (yellow) and ideas for improving spaces (blue).

Based on the detailed audit of community spaces, the group then began to develop their vision for a community-wide plan aimed at improving the design and accessibility of some of these spaces. This included agreeing on the aims and objectives of the group and developing a set of guiding principles for the redevelopment and maintenance of spaces for play.

Activities were also facilitated to support the group in prioritising sites for re-development; identifying ways in which ‘safer’ routes could be secured and promoted between these spaces and generating a wide range of ideas for how the design of these spaces might be enhanced.

One of the outcomes of the above process was the development of a draft master plan. This plan aimed to communicate the vision of the group and to encourage greater community and partnership involvement in realising these aspirations. The plan did not intend to ‘set in stone’ exactly what each site would look like, instead, it aimed to identify the preferred sites for re-development and suggest the types of features/themes that could be incorporated in each. It was then agreed that the redevelopment of each site would require further community and partnership engagement nearer to the time when work was expected to take place. 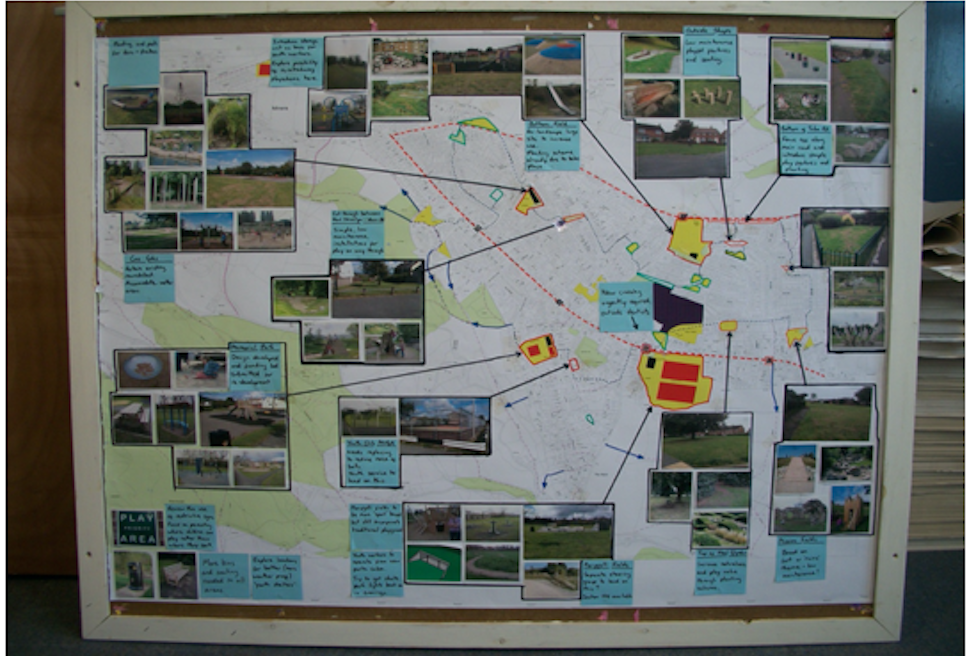 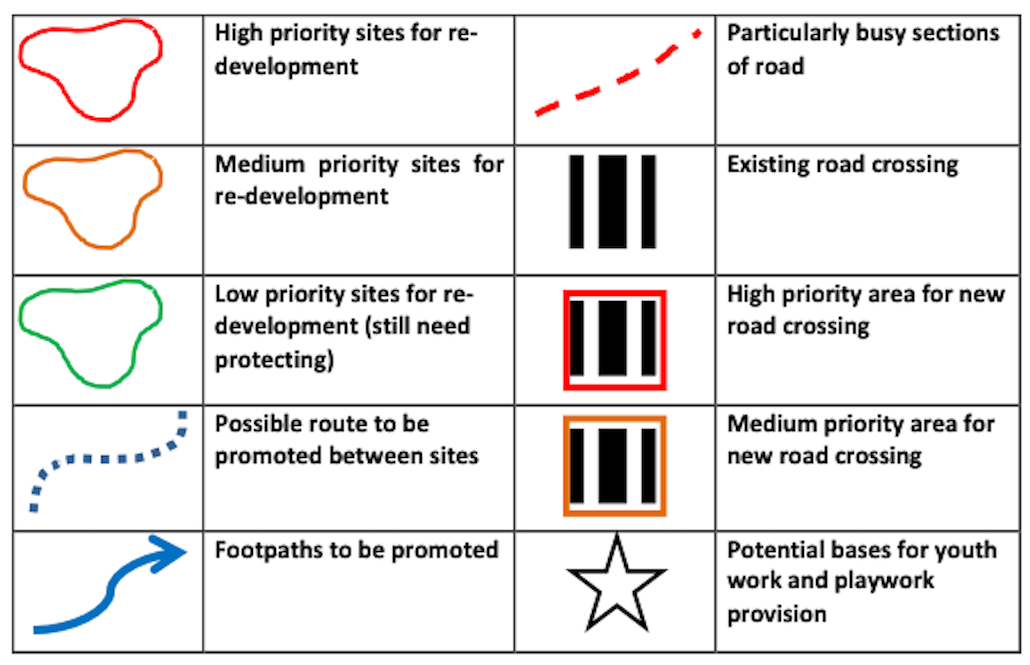 Places for people and playing

In terms of physical enhancements, it was also agreed that each identified site should be designed to offer something different to the others which might then encourage people to move between them. The group decided that the designated play areas should be seen as ‘multi-use’ and offer something for all members of the community, not just playing children. In particular, adults recognised the need to try and create spaces that work for older children (i.e. teenagers) and involve them in the re-development process so that they feel some sense of ownership.

Whilst improvements to existing designated play areas were seen as a priority by adults, they also recognised that these spaces alone were not enough. This was partly because the adults wanted children to have a wide variety of play experiences but also, on a more practical level, some children live closer to other spaces which they may be more likely to use.

Other spaces in the public realm, tend to be less formally designed and it was recognised it may be cheaper and quicker to enhance the play value of these areas through improved landscaping and planting. This does not necessarily mean that these other spaces should be formally designated as spaces for play but that their value for play should be acknowledged, protected and (where possible) enhanced.

Playing alongside other formal leisure and recreation facilities

The idea of ‘ribbon developments’ was also discussed as being particularly suited to sites with sports pitches, where additional landscaping and planting could create opportunities for play around the edges of these sites.

Finally, in terms of urban design, the impact of busy roads cutting through the community was unavoidable. This was a major concern for parents which was likely to prevent children from being allowed to access spaces across the community without being accompanied by an adult. As a consequence, another priority was to establish additional and safer crossing points.