Since the commencement of the Welsh Play Sufficiency Duty in 2012, a process for which there was no precedent, a series of research studies have been commissioned by Play Wales exploring the work involved and what has changed during that time.

The principle of Play Sufficiency was established as a legal duty in Wales in 2010, with work commencing in 2012. In 2019 Scotland adopted the same principle as a part of their planning processes and currently Play England and the Playwork Foundation are campaigning for political parties across the UK to include play sufficiency as a manifesto commitment in any forthcoming elections. Internationally (and of particular significance to those countries yet to adopt this principle) in 2013 the United Nations Committee on the Rights of the Child, in their General Comment on children’s right to play, recommended that governments introduce legislation to support children’s play based on the principle of sufficiency, a clear endorsement of the pioneering approach taken in Wales.

This means that what happens in Wales as a consequence of the Welsh Play Sufficiency Duty is of international significance. Fortunately Play Wales, who have been instrumental throughout the development and implementation of the Welsh Play Sufficiency Duty, were aware of the significance of this legislation and the work associated with it. As a consequence, they commission Stuart Lester and Wendy Russell (then working for the University of Gloucestershire) to carry out a research project exploring how different local authorities approached the first part of the duty – the challenge of assessing the sufficiency of children’s opportunities for play. This research focussed on three case study local authorities as well as reviewing all of the final play sufficiency assessments submitted to the Welsh Government. The subsequent report is essential reading for anyone wishing to understand more about the complexities involved in the implementation of such a progressive piece of legislation for children’s play. 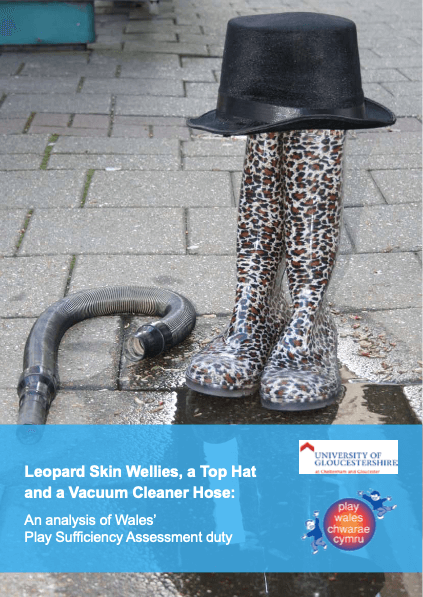 In 2014, shortly before the Welsh Government launched their updated statutory guidance, Stuart and Wendy published the findings of a follow up research project. In this research the three case study local authorities were revisited to examine progress made since their initial play sufficiency assessments and to see how they were preparing to meet the second part of the statutory duty – the duty to secure play sufficiency.

Both of these reports provide valuable insights into how local authorities and their partners can work towards securing sufficient opportunities for play. Of equal importance to their findings, Stuart and Wendy developed and introduced a number of conceptual tools focussed on enabling adults to pay greater attention to the environmental, societal and organisational conditions that can support the emergence of playing.

This includes working towards, what Stuart and Wendy called, ‘collective wisdom’; recognising that rather than just ‘hard’ facts, the process of play sufficiency relies on adults developing a deeper and more nuanced appreciation of the ways in which children’s environments may enhance or inhibit their ability to find time and space for play. To do so requires working across professional boundaries, with the knowledge different adults have to share as well as valuing the rich and situated knowledge children have about their local environments and recognising that this is different to the experiences of adult.

Stuart and Wendy suggest that the process of assessing and securing play sufficiency is dependent on both the ‘account-ability’ and ‘response-ability’ of adults. This includes our ability as adults to account for (identify) the ways in which we impact, both positively and negatively, on children’s time, space and permission for play and our ability to work together (across professional domains) to better respond to children’s play by taking action to protect, maintain and cultivate more favourable conditions for playing.

Stuart and Wendy also argue that whilst children will play wherever and whenever conditions allow, there are forces, primarily associated with keeping the economy going, that serve to restrict children’s access to time and space for play; with the result that children are increasingly expected to play in designated times and spaces and are seen as ‘out of place’ elsewhere in the public realm. As a consequence, they suggest that play sufficiency is a matter of spatial justice, requiring adults to critically scrutinize our habits, assumptions and routines to consider how they/we might include or exclude children and their play from the public realm.

Finally, they adapted Ash Amin’s four registers of a ‘good city’ (perhaps most easily understood as ways of working), which it is suggested can be combined to nurture a play friendly country and create environments that are more ‘open to children’s play presence’. This includes:

Repair and maintenance – protecting and maintaining the opportunities currently available for children’s play as well as ‘repairing’ the way things work to improve children’s access to time and space for play.

Relatedness – paying attention to the ways in which adults think about, care for and interact with children, encouraging adults to recognise and value the ways in which children are different to them and how their actions might impact on children’s ability to play.

Rights – respecting children’s right to play and recognising that upholding this right is essential to upholding other rights associated with freedom of thought, freedom of expression, freedom of association and peaceful assembly (gathering together) and freedom to participate in the public realm.

Re-enchantment – looking at how people’s habits, routines and attitudes support or constrain play, then taking action to (gently) disturb the way things usually work to reveal how children’s environments could be made more conducive to playing. 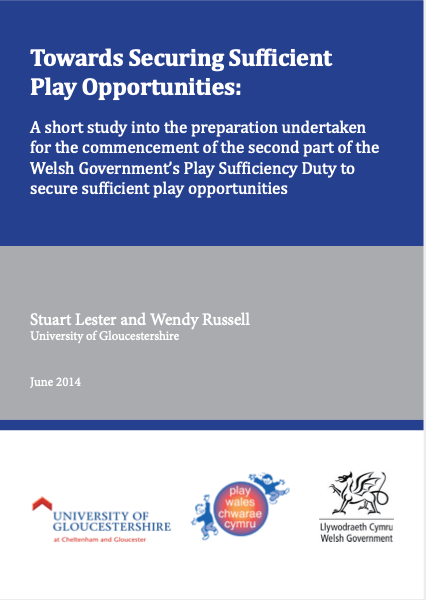 More recently in 2019, Play Wales commissioned a small research team again led by Dr Wendy Russell but this time working with Ben and Mike from Ludicology and Charlotte Derry from Playful Places. Our task was to explore perceptions of change since the Welsh Play Sufficiency Duty was introduced six years earlier. This again included documentary analysis of local authority play sufficiency assessments, interviews with lead officers and fieldwork in three case study authorities.

The summary report from this latest research has recently been published by Play Wales. In brief the report identifies that there have been some major challenges primarily associated with the austerity agenda which has resulted in cuts to services and staff making securing play sufficiency more difficult. However, despite these challenges there is still great enthusiasm for the Play Sufficiency Duty and there have been some significant achievements, in particular the development of partnership working across local authority departments and with partner organisations as more adults recognize their responsibilities towards children and their play. For those involved this has resulted in a broad appreciation of the nature of children’s play and the conditions needed to support it. 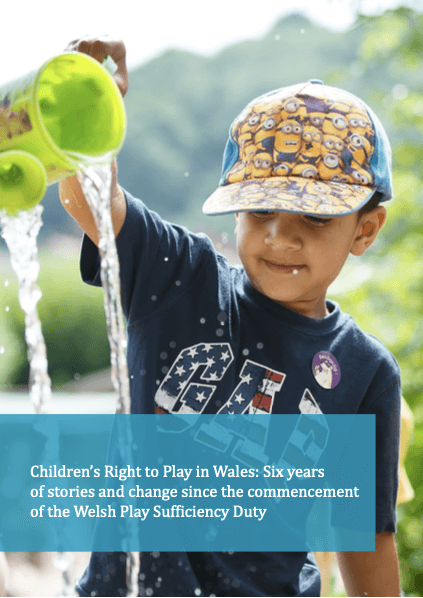 Lester, S. and Russell, W. K. (2014) Towards Securing Sufficient Play Opportunities: A short study into the preparation undertaken for the commencement of the second part of the Welsh Government’s Play Sufficiency Duty to secure sufficient play opportunities. Cardiff: Play Wales.

Russell, W., Barclay, M., Tawil, B. and Derry, C. (2019) Children’s Right to Play in Wales: Six years of stories and change since the commencement of the Welsh Play Sufficiency Duty. Cardiff: Play Wales.